Tenerife  has a reputation as a party island but, away from the busy coastal resorts, much of the island lives its life at a slower pace, unchanged for centuries and largely untouched by coastal developments. Having said that, there’s nothing Tinerfenos (native to Tenerife) like better than a party and there’s a fiesta somewhere on the island almost every week of the year. The microclimates on Tenerife enable you to move from snow to sunbathing in a half day journey, and the volcanic make-up of the land offers unrivalled drama in its scenery.

There are many towns and villages on the island that deserve a little time to explore and to discover their treasures. The best way to do that is to take a drive tour around the island. I recommend you rather to do it on your own than to take some of offered sightseeing excursion aroun the island. Doing it on your own is the best way to explore this island and the feel the soul of the ancient time. You can rent-a-car for a very low prices. It is better to rent it on a weekly basis, the prices are even much lower and you+ll save some money.

This independent drive around the island gives you opportunity to make stop over when you want and where you want and to stay as long as you want. But if you don’t feel safe and enough selfconfidence to do it on your own, than take a sightseeing excursion around the island. Many local travel agencies offer half or full day excarsions. In that case have on mind the rule: “book direct and save the money”. These direct excursions offer full passenger insurance, modern air cinditioned coaches, fully lincesed travel agent complying with all EU regulations.

If you choose to drive around the island on your own, I recommend to buy combined trail finder and guide book crammed on information on Tenerife’s most attractive toens and areas.These guides are very easy to follow and provide with scenic routes including detailed directions.

I will recommend you several tourist attractions on the island that you should include in your half or full day out sightseeing drive tour around the island.

As I mentioned there are many very pitoresque towns and villages that deserve to take your time.

Los Realejos – this town ios rarely on the tourist map, yet it holds a significant place in

Tenerife’s history. It was here that the last of the native Guanche Menceys (Kings) surrendered to the Spanish in 1496, thus relinquishing Tenerife into Spanish domain. The leader of the Spanish conquistador, Alonso Fernandez de Lugo, then made his home in Los Realejos and oversaw the planting of the first sugar cane plantations on the island which marked the beginning of Tenerife’s economy growth. Folloeing surender the Guanches were baptisted into the Cristian faith and today, the Church of Santiago Apostol, Tenerife’s oldest Christian church built in 1498, occupies that spot; its magnificent spire is the iconic symbol of the town.

Los Realejos Bajo contains the historic old quarter of the town and can be reached by taking an immediate right after the Church of Santiago, at the Osiris Cafe. The road takes you into the old town, past the magnificent San Francisco Drago Tree and down an impossibly steep street to the Churc of Nuestra Senora de la Concepcion which was originally constructed in the early 16th century. After the church if you turn the left, you pass the Los Gemelos Drago Trees (the Twins) and left again past the Plaza de la Iglesia surrounded by 16th and 17th century houses. Continuing up Calle Los Principes, takes you the small Ermita of San Sebastian, built in 1731 for the administrator of the Hacienda de los Principes, the balconied building next door where Alonso Fernandez de Lugo lived.

The Dragon Tree – this tree was once prevalent throughout the Mediterranean but the ice age pushed t’s habitat further and further south until now it’s restricted to the Canary Islands, Madeira and Cape Verde. The Drago is virtually impossible to age as it doesen’t produce annual growth rings like other trees.As a result, there+s much speculation as to the age of the fine, 17 metre gigh specimen that stands in Icod de los Vinos, but it’s popularly held to be between 2.000 and 3.000 years old. The tree’s resin, which is known as Dragon’s Blood because it turns red on contact with air, has medicinal properties and has been prized throughout history. The Guanches (original native inhabitansts of Tenerife) used it as a heaking ointment and even as an embalming liquid for their dead, noble women in Venice used it in hair dye; Fiorentine masons used it to stain marble and 17th century Italian violin makers used it to varnish their instruments. With all these uses, it’s a wonder there are any left at all!

La Guancha – this village was founded under tragic circumstances. In the 16th century, conquistadors from santa Catalina spied a beatuful young native girl collecting water from a fountain. otting the soldiers, she ran into the Laurisilva forest; however, the captain of the troop, mesmerized by her beauty ordered her capture. Unfortunately, rather than be taken, she threw herself down the ravine. The town and and municipality, were subsequently named in her honour. La Guanche was an isolated farming community until a road was built connecting it with Icod de los Vinos in 1931. The streets aroun the 17th century Iglesia Dulce Nombre de Jesus are pituresque with vine covered alleys and courtyards, heavy bunches of grapeshang from their branches during harvest season. You can try one of the area’s distinctive golden wines from a local shop! Nearby ž, about 3 kilometres beyond, is the peaceful picnic zone at La Pinaleta with barbaques, a children’s play area. It’s nice place to have a lunch.

La Orotava – is one of the most pitoresque and interesting towns in Tenerife.

A beautifully preserved old quarter and it’s well worth spending a couple of hours here. With so much to see, it’s best to just wander the old quarter, going through doorways, into churches and courtyards and exploring gardens and streets. Here are a few tips to help you get the most from your status as an independent visitor: Most tour groups head straight to the Casas de los Balcones, 17th century mansions housing handicrafts. Allthough still worth a look in (Casa del Turista has a sample of the famous carpets and photographs of the real thing from years gone by in its courtyard and Casa de los Balcones has a perfect, leafy courtyard with enclosed balconies), the best views of the La Orotava Valley can be enjoyed in solitude from the outher courtyard of the Hospital de la Santissima Trinidad just up the strreet on the right, opposite the Drago tree.
The interesting drum in the doors was a receptacle for abandoned babies, it’s now locked, presumably as a deterrent to the practice. Every year in June, at the feast of Corpus Christi, the area in front of the La Orotava Ayuntamiento (Town Hall) is carpeted in fantastic, intricate religious representations, using coloured volcanic earth and chalk. The tradition began in 1847 when the noble Lady Leonor del Castillo de Monteverde had an idea to create a carpet of petals in a traditional design outside her house in Colegio Street for the Corpus Christi procession to walk over. Since then, the designs have become larger and more complex so that nowdays they take weeks to prepare and have become a pilgrimage for many thousands of visitors to see. 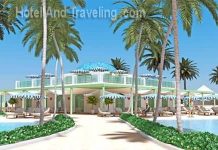